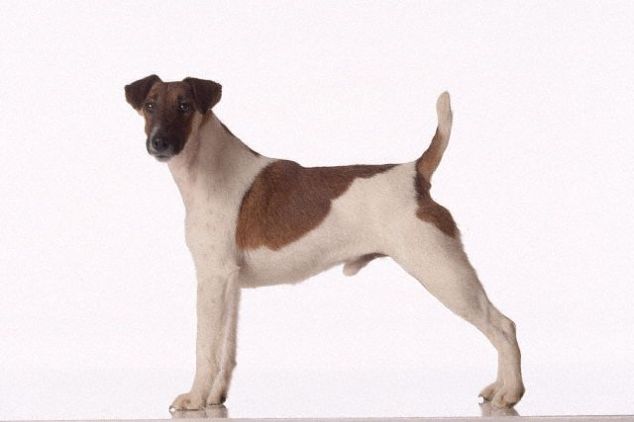 Description: The Fox Terrier is a medium sized dog. The skull of the Fox Terrier should be nearly flat and the face should gradually taper from eyes to the muzzle. Ears are small, V-shaped, and held close to the cheeks. Feet are round and small with long legs. The strong tail is carried high but, not curled. In the United States, where it is legal, the last 1/4 of the tail is docked; this practice is illegal in the United Kingdom. The Smooth Fox Terrier has a short and smooth coat while the Wire Fox Terrier has a very thick, wiry, double coat. The coat of both variations are predominately white with brown and black markings.

A Wire Fox Terrier named Asta appeared in the film series, ‘The Thin Man’ during the 1930’s. Asta’s appearance in this series caused a sharp rise in the breeds’ popularity in the USA. The Fox Terrier has out performed other breeds of dogs in the Westminster Kennel Club Dog Show but, is a mostly a rare breed in America. The Fox Terrier eventually helped produce popular terrier breeds like the Jack Russell Terrier, Toy Fox Terrier, and the Rat Terrier.

Temperament: Fox Terriers are energetic, playful, smart, and loyal companions. They were bred to be independent thinkers so this breed needs a firm pack leader and someone who can be the alpha. These dogs can be easy to train and excel at doing tricks. While very intelligent, they can be difficult to housebreak. These dogs were bred to hunt foxes and small game so they have a naturally high prey drive. Fox Terriers have a tendency to chase and even kill small non-canine animals including neighborhood cats. Fox Terriers wouldn’t be a good choice for households with small children as Fox Terriers do not have patience for being teased and rough play. Fox Terriers also have a low tolerance for other dogs. Unless properly socialized, this is not a dog that would enjoy a trip to a dog park to be with other dogs. Fox Terriers have very high energy requirements and remain active indoors. Prospective owners who think their Fox Terrier will eventually calm down with age should keep in mind that this breed maintains its puppy like energy into its teens.

Health: Fox Terriers can be susceptible cataracts. This breed can also be susceptible to Legg-Calve-Perthes Disease, which is a deformity of the hip joint resulting in arthritis. Surgery can be used to correct this condition. Deafness is also more common among Fox Terriers than some other breeds.

Exercise: As mentioned above, the Fox Terrier has very high energy requirements. An hour of exercise a day should be enough to keep this breed from becoming destructive and over rambunctious. If not properly exercised, your Fox Terrier could make his own exercise by digging holes in the yard, running away, or chewing up your belongings.

Trivia: Rear Admiral Richard Byrd’s Fox Terrier, Igloo, accompanied him on the first journey to the south pole. A Fox Terrier named Chester was in the film Jack Frost. The logo for RCA pictures a Fox Terrier looking at a phonograph. The Fox Terrier, Caesar, was a companion of King Edward the VII.